The kidnapping was a painstaking process that lasted just over four hours. Here, workers from JP Cullen and Dawes Rigging & Crane Rental maneuver the rock into position above the flatbed truck that would haul it to university-owned land southeast of Madison near Kegonsa Lake. Photo: Bryce Richter

The University of Wisconsin-Madison moved the old Chamberlin Rock, an object that had become a painful symbol of racism for generations of students, to a site off the main campus on August 6.

The rock had stood atop Observatory Hill since 1925. That same year it was mentioned in a newspaper headline by a deeply offensive nickname that included a racial insult. The derogatory nickname was commonly used at the time to refer to any large dark rock.

The Wisconsin Black Student Union, in partnership with Native American student organization Wunk Sheek, led an effort to remove the rock from campus. The main campus of UW-Madison is in the ancestral lands of Ho-Chunk.

Last November, students testified at a meeting of the campus planning committee that the rock’s continued presence was a daily reminder of the injustices, past and present, that students of color face on campus. Committee members recommended to Chancellor Rebecca Blank that the rock be moved off campus; Blank accepted this recommendation.

“It took courage and commitment for the Wisconsin Black Student Union to move this issue forward and influence change alongside student leaders at UW Wunk Sheek,” said Vice Chancellor of Student Affairs Lori Reesor. â€œAmid the demands for justice following the murder of George Floyd last summer, students wanted change on campus and they worked hard to achieve it. While the decision required compromise, I am proud of the student leaders and the collaboration it took to get there. 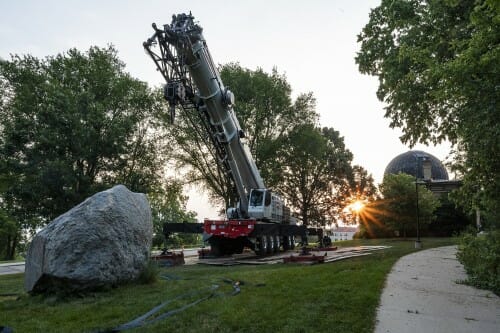 As the sun rises over Lake Mendota and the Washburn Observatory, a crane is ready to lift the boulder. Photo: Bryce Richter

UW-Madison senior Nalah McWhorter, who served as president of the Wisconsin Black Student Union in the 2020-21 academic year, was among a small group of spectators who watched a crane lift the rock from the ground early Friday morning.

â€œIt was very meaningful for me to be there and see the process through to the end,â€ said McWhorter. â€œAbout a year ago we released our requests and met with the Chancellor and explained to her why these requests meant so much to us. It was a highlight today to see this demand come full circle. “

McWhorter said she hopes the rock removal inspires other students to work for change on campus.

â€œI see this as an offer for the next generation of students to build on,â€ she said. â€œWe started this project, and now the next set of students can continue to work on the other requests and come up with other ideas. We hope that this movement and momentum will continue.

The rock is a rare and important example of a Precambrian-era erratic block of ice, probably over two billion years old. It had been designated as a campus monument in honor of Thomas Chamberlin, a renowned geologist who also served as president of the University of Wisconsin from 1887 to 1892.

The rock was moved to university-owned land southeast of Madison, near Lake Kegonsa. The region lies in a landscape of glacial till.

â€œMoving the rock to this remote site avoids further damage to our community while preserving the educational and research value of the rock for current and future researchers,â€ said Gary Brown, director of campus and campus planning. landscape architecture, which led the search for the new location of the rock. . â€œStudents and the general public will no longer casually encounter the rock, but it will remain available to those looking for it specifically for teaching and learning purposes. “

The rock has immense educational and educational value in addition to its scientific importance, according to the UW-Madison Department of Geoscience. The department uses rock in its courses. 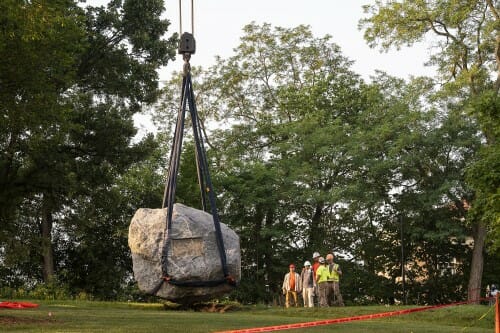 The rock is lifted from the ground. Archaeologists then observed the area under the rock but saw nothing significant. Photo: Bryce Richter

UW-Madison was legally required under the Wisconsin Burial Site Preservation Act to obtain permission from the Wisconsin Historical Society to relocate the rock, as it was in what is known as a burial site cataloged. The rock stood near effigy mounds which are sacred burial grounds for Native Americans. The Wisconsin Historical Society approved the UW permit on August 2 following two rounds of public reviews that solicited comments from various stakeholders, including the indigenous nations of Wisconsin.

â€œWe have worked closely with the Wisconsin Historical Society and our colleagues in the Ho-Chunk Nation to ensure minimal, if any, disturbance to nearby sacred burial sites,â€ Brown said. â€œAlthough the rock is not atop a burial site, it was located in a protected Native American burial area.â€

Bill Quackenbush, tribal history preservative for the Ho-Chunk Nation, and Zachary Stencil, project manager at the Archaeological Research Laboratory Center at UW-Milwaukee, observed the rock’s displacement. The presence of an archaeologist was a condition of the state permit. The contractor installed ground mats to minimize any disturbance or compaction of the soil during the work. Over the decades, various estimates had placed the weight of the rock between 35 and 70 tonnes. The crane operator on Friday was able to get an exact reading: 42 tonnes.

Historians at UW-Madison have found no evidence that the racist term attached to the rock in the 1925 newspaper article was used in any capacity by the university. However, they note that the Ku Klux Klan was a pervasive presence in the Madison area at the turn of the last century, and people of color were often mocked in minstrel performances at campus facilities and in satirical campus periodicals.

The cost of removing the rock is not expected to exceed $ 50,000 and will be paid for by the Chancellor’s Office using private donations. 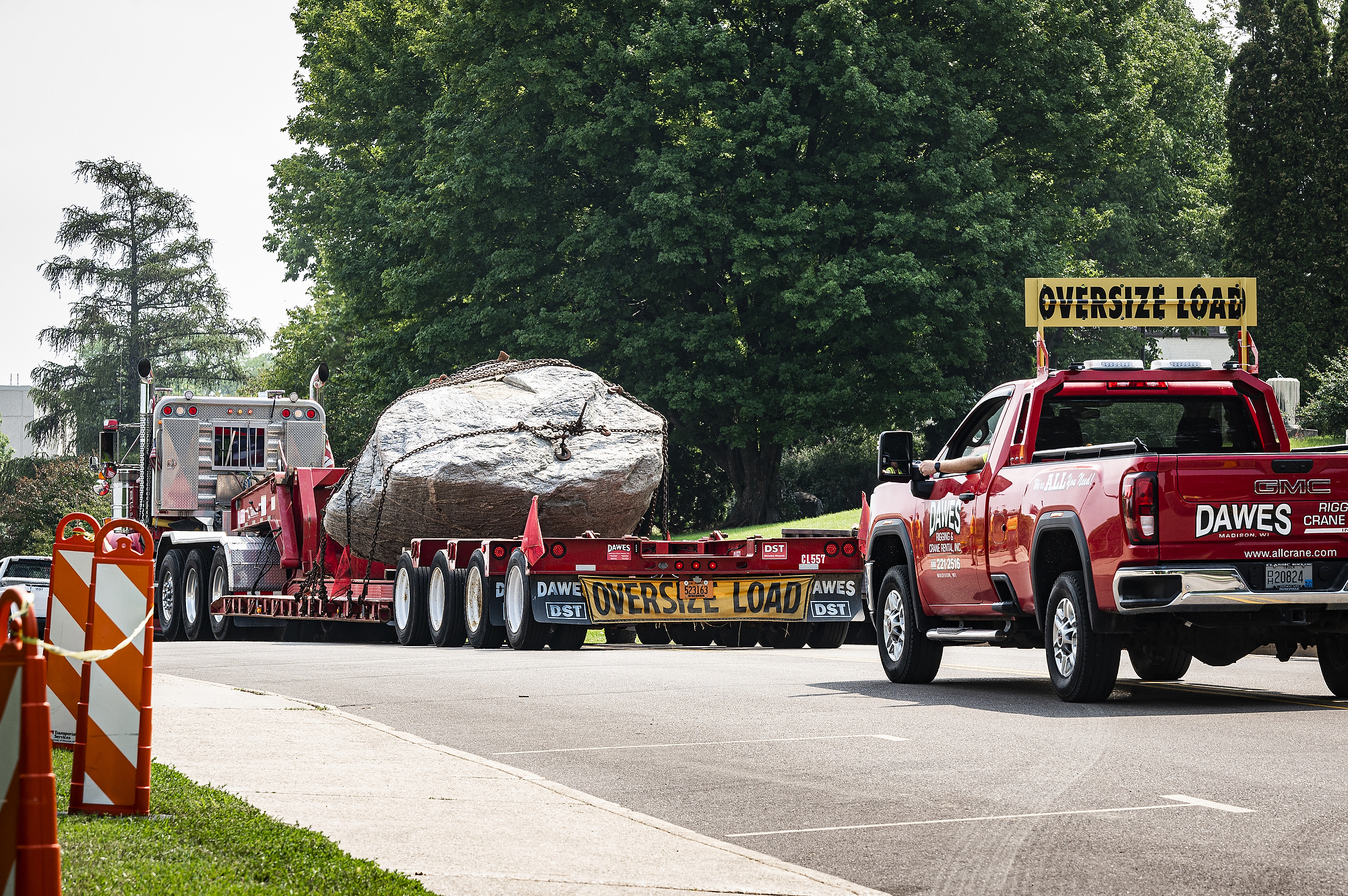 Secured aboard a flatbed truck, the rock descends along Observatory Drive to its new site near Kegonsa Lake. Photo: Bryce Richter